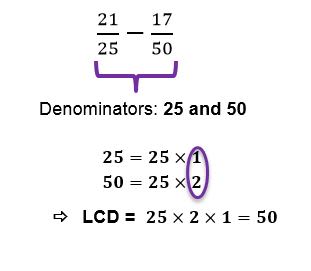 Step 2: Express the fractions to share the lowest common denominator

Now that the denominators are the same, we can subtract the numerators directly.

Simplify the difference of the fractions by cancelling out common factors.

Examples of how to subtract fractions

Since they share the same denominators, we can subtract the numerators right away.

Simplify the difference by cancelling out the common factors.

Since the denominators are not the same, we’ll need to find the LCD shared by the fractions.

Now, rewrite the fractions so that they both have 30 as their denominator.

Once the fractions share a common denominator, we can now subtract the numerators right away.

This means that Blake would still have 13/30 tons of bananas left after the first batch.